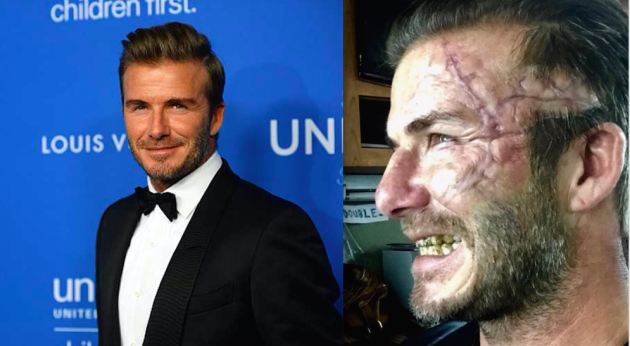 A red carpet regular, it’s not often that we see David Beckham looking anything short of perfectly polished. Perfect teeth and carefully coiffed hair completed with a healthy glow make up the classic DB look. However, the star shared a rather shocking instagram recently that sparked concern with his fans. With a gnarly looking scar running down the side of his face and badly maintained teeth, Becks was a far cry from his usual pristine appearance.

But, fear not Beckham fans! This shock celebrity transformation is only temporary. The former footie star and charity ambassador was just helping out his mate, film director (and Madonna’s former husband) Guy Ritchie. The pair are good pals, and David is known to often make appearances in Guy’s films as an extra or background part. David’s shock transformation was for Ritchie’s latest film, ‘Kind Arthur’.

We think we prefer David’s usual look, don’t you?!