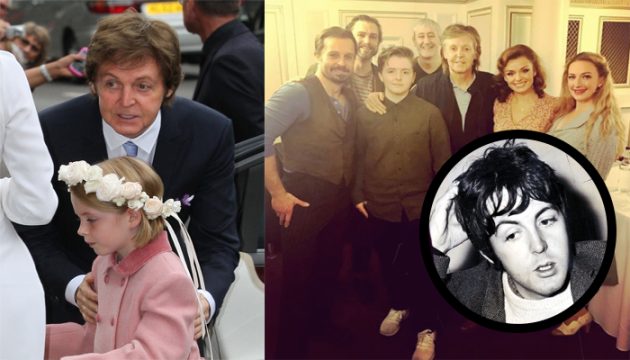 You know what they say: like father like daughter! Never was there a truer saying for this latest snap of Sir Paul McCartney and his daughter Beatrice! The Beatles legend was snapped meeting the cast of musical Carousel in London with his teenage daughter Beatrice over the weekend.

Beatrice, now 13, is the daughter of Sir Paul and his ex-wife Heather Mills.

Beatrice is rarely seen in public, with both of her parents wanting to maintain her privacy and keep her out of the public eye.

During an interview, her mother Heather Mills said, “I rarely talk about my daughter. I’m really proud of the fact that I have kept her image protected.”

“She’s not mixing in celebrity lifestyles. She’s not out in public places.”

One of the last times Beatrice was papped with her famous father was in 2011 when she acted as a bridesmaid at Sir Paul McCartney’s wedding to Nancy Shevell.

Six years later and little Beatrice is looking all grown up – and more like her father than ever! Even down to rocking Paul’s signature Beatles-era quiff, the family resemblance between Beatrice and her dad was undeniable in the sweet snap posted by Carousel star, classical singer Katherine Jenkins.