Holly Willoughby was reduced to tears on air during a segment inspired by the case of Charlie Gard, forcing co-host Philip Schofield to call for an early ad break.

Speaking with a caller who had rung in to participate in the difficult conversation, the panel, including Holly, Phil, agony aunt Deidre and resident doctor Dr Ranj, were all visibly upset hearing the woman’s heartbreaking story of losing her son.

The caller, Angela, said: ‘My story is quite the opposite [of Charlie’s] because we had a disabled child and for the last two years of his life he was not able to do anything for himself. He was in terrible pain. We actually set up a DNR, a do not resuscitate.’ 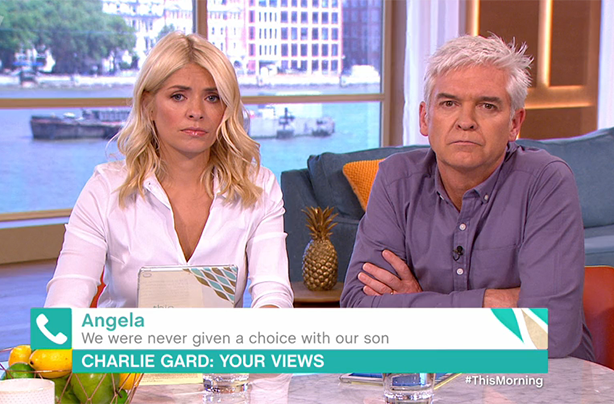 However, when he contracted septicaemia at the age of 16, Angela’s son was separated from his family for treatment and doctors apparently ignored the order. He was kept in an incubator, despite being effectively brain dead, and died shortly after from cardiac arrest.

‘They decided rather than honour our DNR, they would incubate him even though he was brain dead. We were left with a situation where when we were taken to him, he didn’t look like our son,’ she explained.

‘It was horrendous, I would not want anyone to ever see that. It was the most undignified death I have ever seen in my life and I have to live with that every day now.’

Managing to hold it together, Deidre told the caller that she would be able to speak to her after the show, but after cameras cut to Holly wiping tears away, murmuring ‘I’m sorry’ beneath the tissues, Phil asked producers to cut to an early advertisement break. The emotional episode prompted a wave of support from Twitter, who sent comfort and well-wishes to the family or the caller, as well as Holly and Phil.

‘Sending all my love to that great mum and so brave to tell us the story of a beautiful son x’, said one user.

‘Sending lots of love to you all . Holly there was no need to say u were sorry for being upset xx,’ said another.

FROM: Our sister site, GoodtoKnow, Written by Marianna Manson